Today we continue with setting up the second stage of the firm’s problem, the cost-minimization problem, where firms choose inputs \((l,k)\) that minimize total cost \((wl+rk)\) in order to produce the optimal amount of output \(q^*\). For now, we are merely assuming the amount of output that is optimal, later we will explicitly solve for it as our first stage (profit maximization problem).

In the long-run, firms can choose many combinations of inputs \((l,k)\) that yield a desired output. We introduce two tools that will remind you a lot like the tools from consumer theory: (1) an isoquant curveCall it an output curve to remember it better.

that, similar to an indifference curve, contains all the combinations of inputs that yield the same output, and (2) an isocost lineCall it just a cost line to remember it better.

that, similar to a budget constraint, contains all the combinations of inputs that are the same total cost. We discuss some properties about each of these things and do some examples in anticipation of putting these tools together in the next class to solve the problem.

For some students, it takes this second time around with the tools of consumer theory for them to finally “click,” and that’s okay! 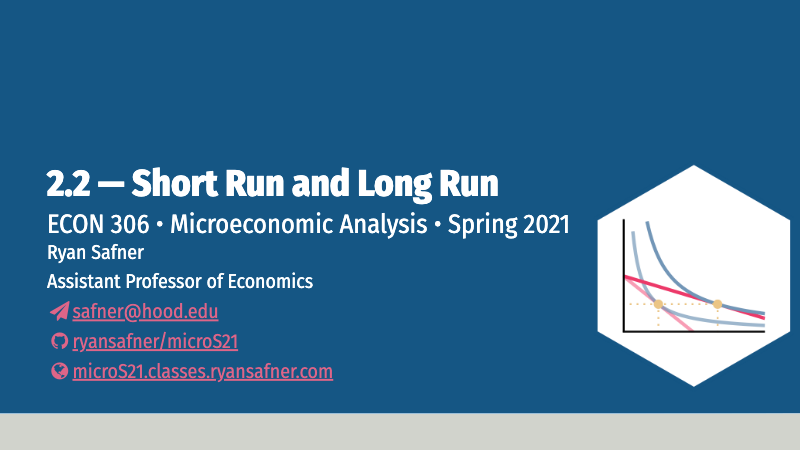 Derivation of MRTS Equation (as ratio of marginal products)

Consider a movement along an isoquant curve, how would this change affect output? There will be a change in \(l\) and a change in \(k\), and multiplying the marginal product of each, and adding these together will give us our total change in output. But we know that if we are on the same isoquant curve, moving along the curve will not change output (all points on the curve are defined as having the same output!). So rearrange the equation as follows:

Notice rise over run, \(\frac{\Delta k}{\Delta l}\), is the slope, which we have defined as the marginal rate of technical substitution (MRTS). \(\blacksquare\)

Solving the Firm’s Problem in One Step

Traditionally, it is easier if we break the firm’s profit maximization problem into two stages:

We proceed in class with the second stage first, and then the first stage. However, this appendix shows that the problem can be solved in a single stage. For simplicity, we look at the short run, where there is a single input \(l\) that can be chosen \((\bar{k}\) is fixed).

Imagine different amounts of input and output that would generate the same profit. We can think of an isoprofit line as having the equation above. 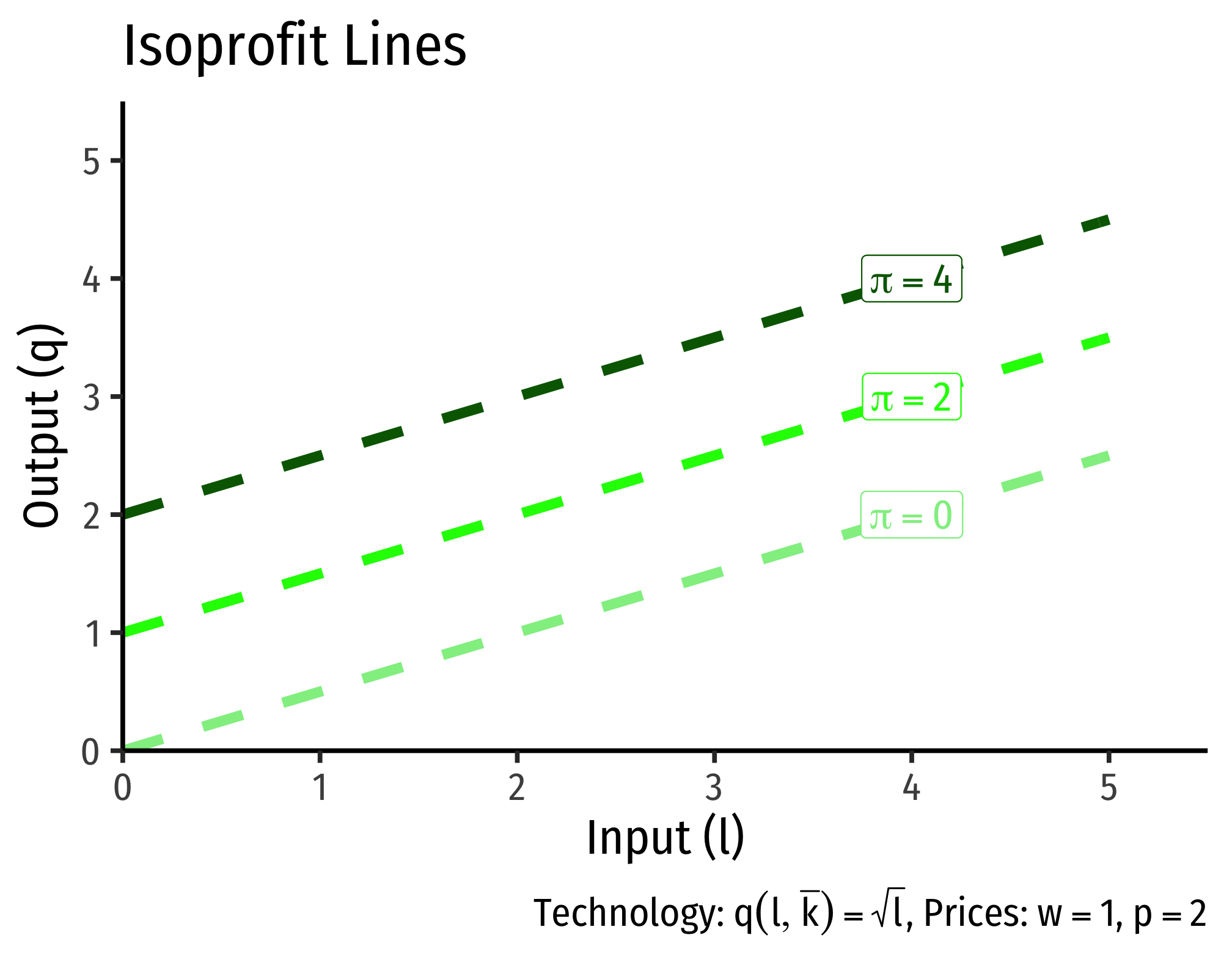 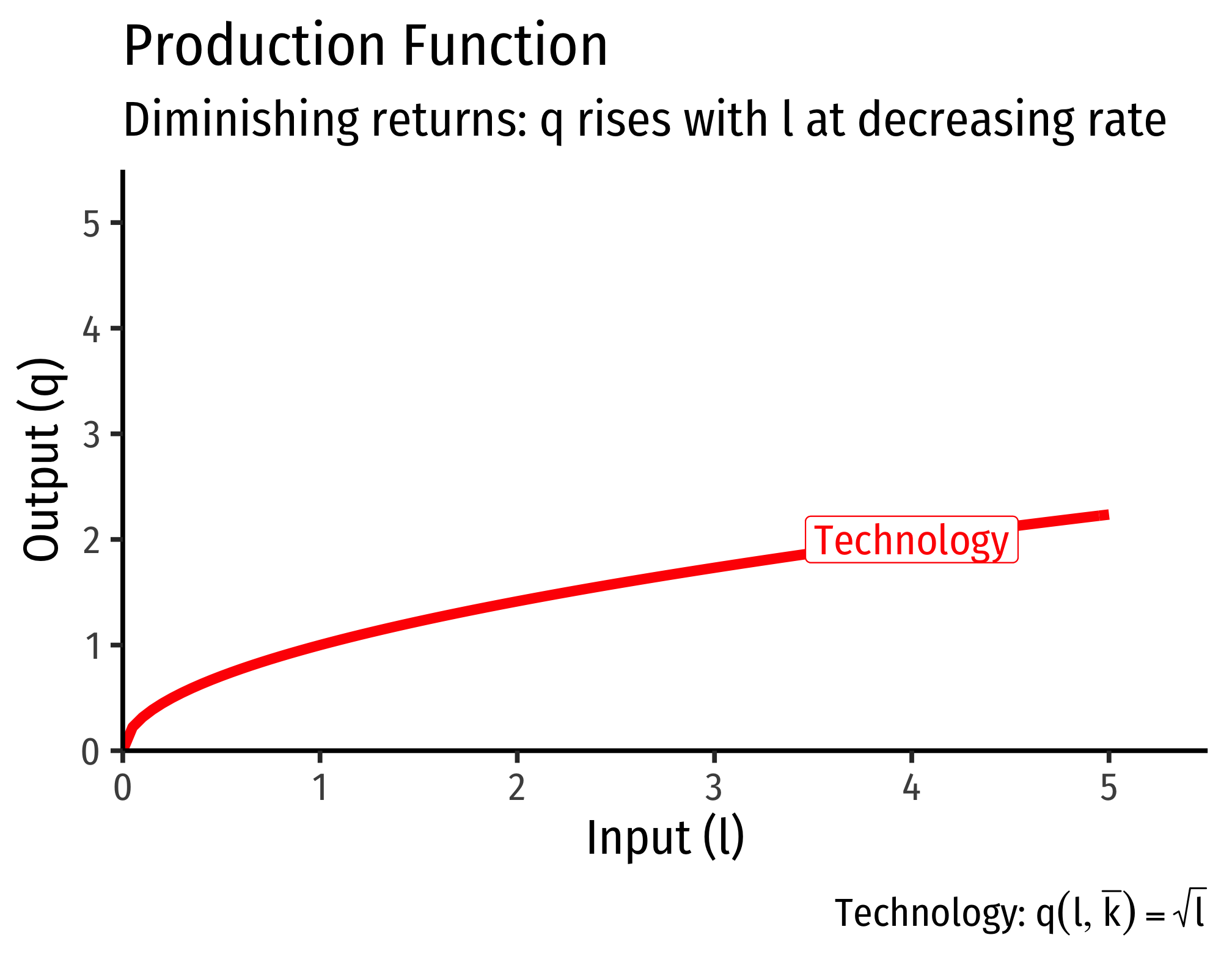 Essentially, we are trying to find the highest profit line tangent to our production function: 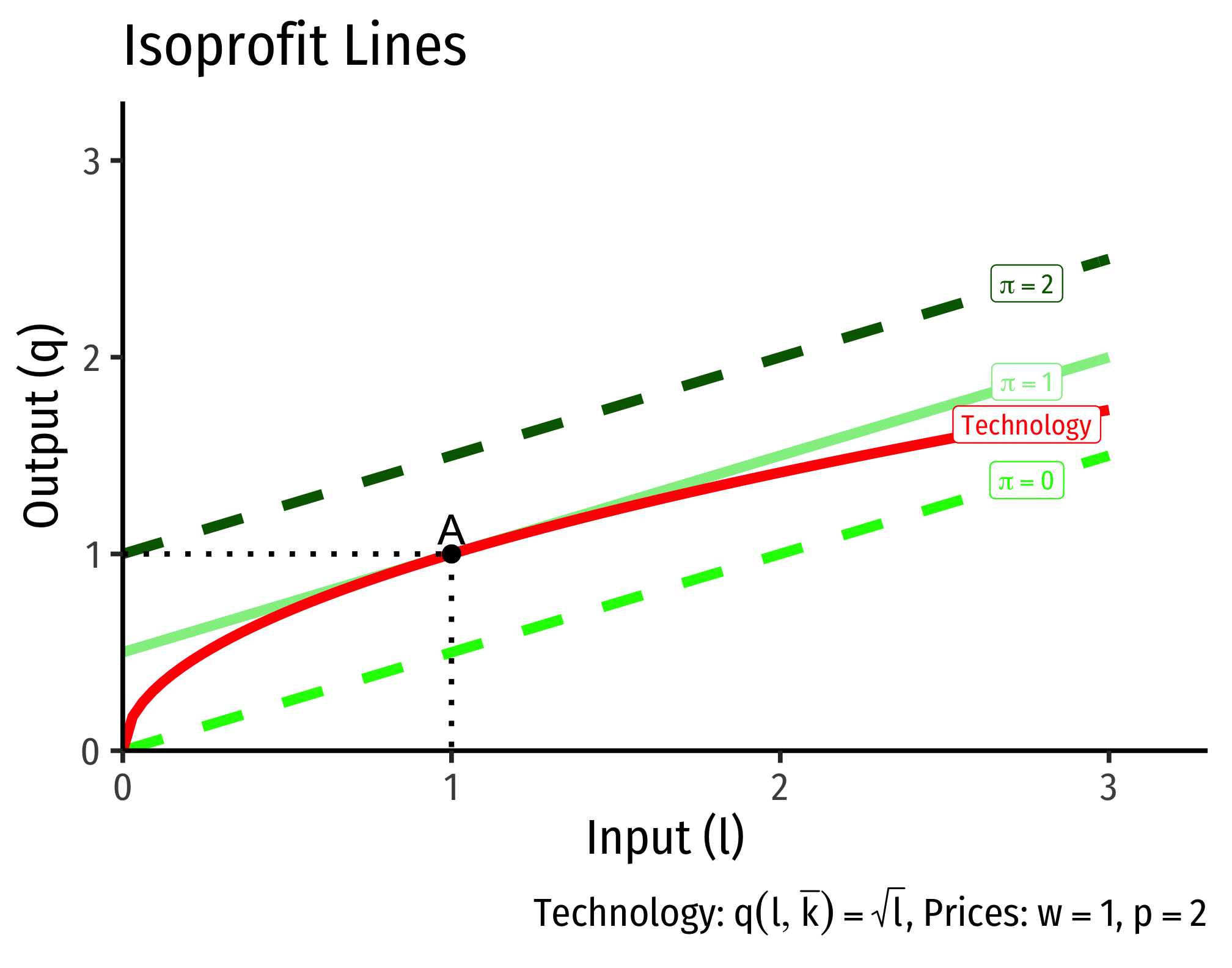 At a tangency, the slopes of the two functions are equal. The slope of the isoprofit lines we know are \(\frac{w}{p}\). The slope of the production function is the marginal product (of labor). So at the point of tangency: \[\begin{align*} \text{Slope of production function} &= \text{Slope of Isoprofit line}\\ \mathbf{MP_l}&\mathbf{=\frac{w}{p}}\\ \end{align*}\]

The Firm’s Supply and Demand Functions

The Geometry of Short-Run Production

This appendix explores the geometry of production functions in the short run. From the common law of diminishing returns (sometimes called “the law of variable proportions”), with constant technology, increasing the use of one factor (e.g. \(l)\), holding other factors constant (e.g. \(\bar{k})\), will ultimately experience diminishing returns. We often break up short-run production into three stages, based on the type of returns to increasing the use of one factor: increasing, decreasing, and negative. 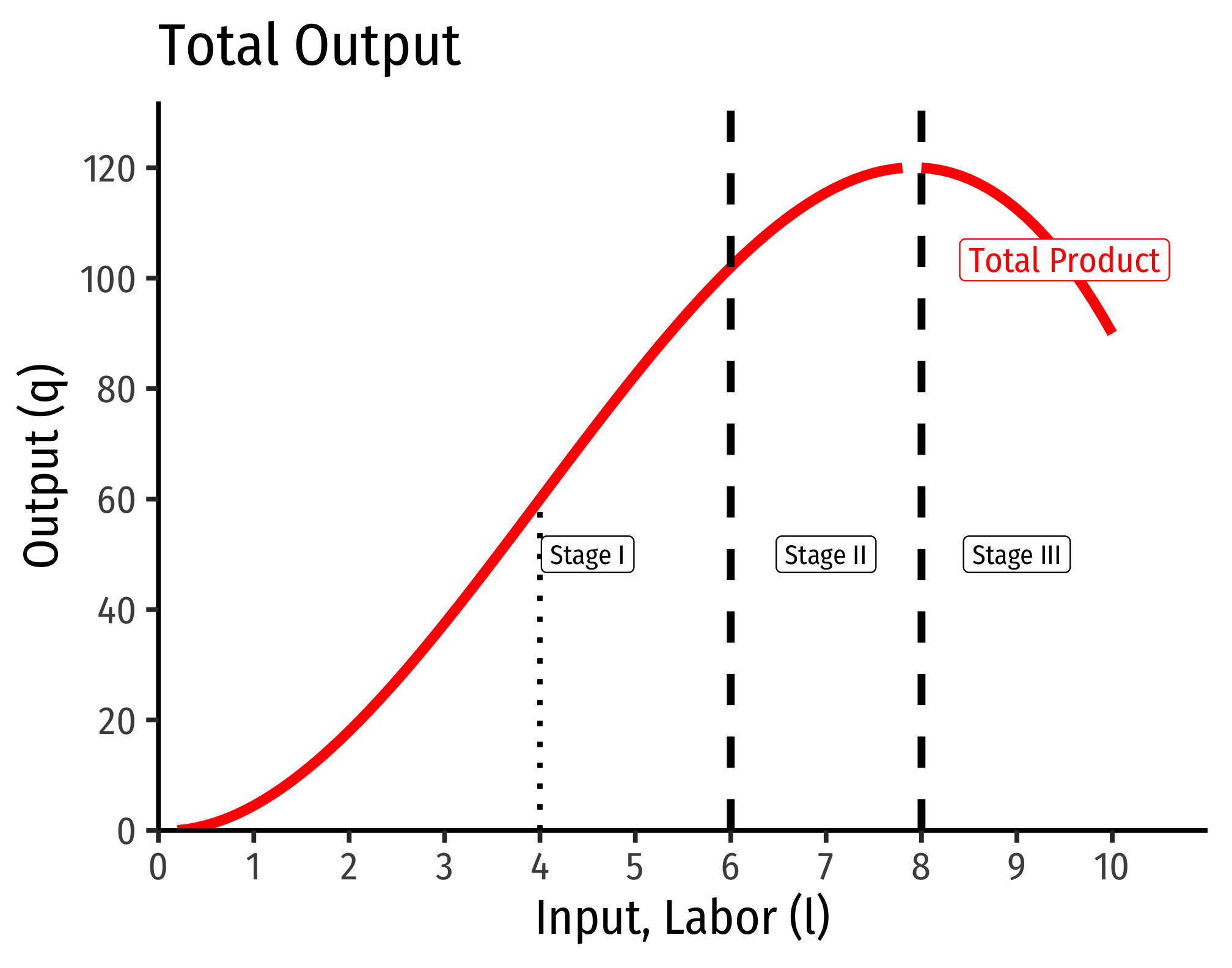 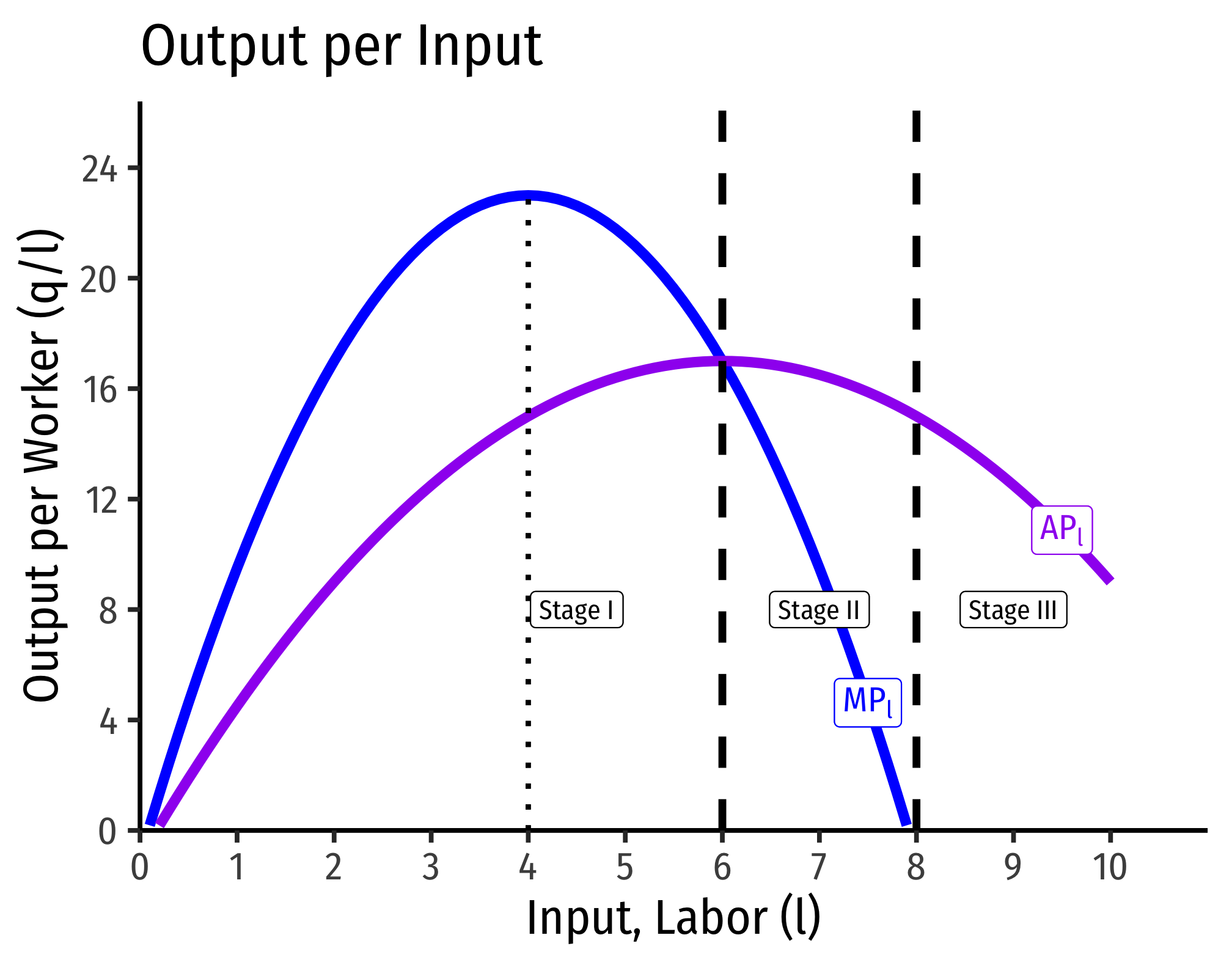 In Stage I, labor experiences increasing returns. Both the marginal and the average product of labor are positive and (mostly) increasing. That is to say, output is increasing at an increasing rate when more labor is added, and the productivity per worker increases. For the example above, Stage I occurs over the range of 0-6 workers.

Intuitively, increasing returns means that output increases at an increasing rate. This is not the same, but you can think of this almost like exponential growth – just by adding a few more units of input we can get massive amounts of output. If this held forever, we could grow the entire world’s supply of food in a single flower pot!

In practice, most firms breeze through Stage I very quickly. Naturally, if firms can boost output a lot, and cheaply, just by adding a worker or two, they will keep hiring workers and hiring workers…

In Stage II, labor experiences diminishing returns. As we discussed with the law of diminishing returns, this will eventually happen to all factors of production if you keep adding them (holding other factors constant). Now, output is increasing, but at a decreasing rate. Adding more workers will increase output, but by progressively less and less, and each worker also is less productive on average, since both average and marginal product is declining (though total product is increasing). For the example above, Stage II occurs over the range of 6-8 workers.

Stage II ends at 8 workers, where the marginal product falls to zero.

In practice, most firms operate in Stage II, so this range is sometimes called the ``economic region’’ of short run production. We have seen that it is in the interest of a firm to keep adding labor during Stage I. We will next see that it is disadvantageous for a firm to keep adding labor beyond Stage II. Hence, the optimal amount of labor is often somewhere in Stage II.

In Stage III, labor experiences negative returns, that is, adding labor actually decreases output! Here we have the “too many cooks in the kitchen” phenomenon. For the example above, Stage III happens when the firm is using 8 or more workers. We can see that the marginal product is negative, and average product continues to decline, as does output.

Recall diminishing returns implies that we are adding labor but holding all other factors (e.g. capital) constant. It is possible to increase the number of workers beyond 8 and still increase output, but that would require an increase in capital. If we do not increase capital, then by continually adding labor we will eventually hit diminishing (and negative) returns.

The Relationship Between Marginal and Average

There is a consistent relationship between any marginal magnitude and any average magnitude. We will see this when we talk about production, about costs, revenues, profits, etc.